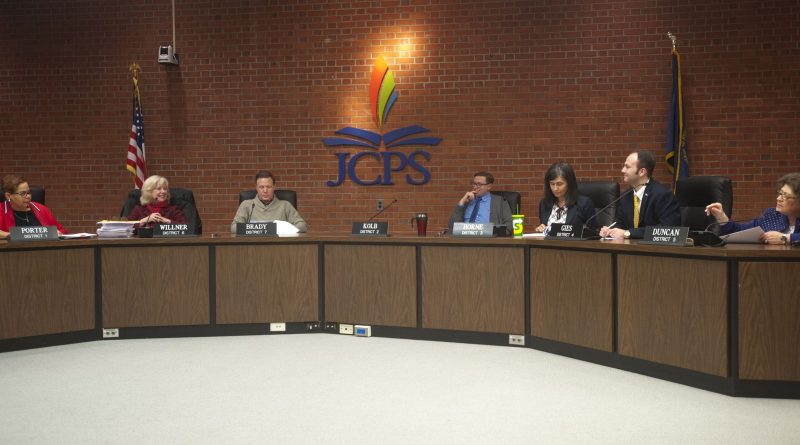 Over the span of three weeks, beginning on February 27th, Jefferson Country Public Schools have been closed a total of six times. According to the JCPS Twitter page, this was caused due to not having enough substitute teachers to adequately cover classes. One third of the teachers had called in sick, an overwhelming number, when there is already a sub shortage. However, this “sick out” was due to the fact that many teachers were in boycott of the recent bills proposed in congress. Several bills cut school funding and one that affects School Board elections. It should also be noted that teachers are not legally allowed to strike.

House Bill 205 – This bill essentially allows some students to receive scholarships to attend “charter schools” or private schools. Regardless, it takes funding away from public schools. This would cost the state over 25 million.

House Bill 525 – This bill allows government officials to replace School Board members with their own selected choices. Currently, School Board members are elected by teachers. Government officials could select anyone they wanted, whether they had education experience or not. Teachers’ are concerned that this may affect how their pension money is spent.

Senate Bill 250 – This bill removes the opportunity for parents to serve on School Based Decision-Making Councils. Teachers value the parents’ opinions and new perspective brought to the Boards.

Senate Bill 1 – This bill requires many local school safety mandates without providing any additional funding to cover the cost of the new mandates. Teachers are concerned that this will pull funding from other programs.

Schools are losing funding for their textbooks, materials and professional development. None of these bills mention raising taxes to increase funding of public schools. The government has already makes several cuts a year, while inflation of prices is rising there is no increase of revenue.

While their reasons for the ‘sick outs’ are understandable, many have questioned the teachers’ approach. Do the means justify the end? Six missed days means that JCPS will go a full week longer than other schools in the summer.

JCPS wasn’t the only school district. Fayette, Bullitt, Madison and Oldham County have also experienced ‘sick outs’, just not nearly on the same level that JCPS has. However, JCPS is also the biggest school district by roughly 60%.

Governor Matt Bevin has reprimanded the teachers. Bevin stated that these sickouts have been arranged by a “handful of activists”. He believes they are interested in power, money, and union dues rather than the benefits of their students. “It’s crazy to me. It’s so irresponsible that we are not putting families and children first.”

Wayne Lewis, Kentucky’s Education Chief with no direct classroom experience, has been asked to comment on the idea of punishing teachers who have called in sick. He claims that that’s not his goal, However, he won’t completely rule out the idea. “It is not a scare tactic,” Lewis said. “It is me saying very clearly that the expectation is that if you are going to call in sick, you should be sick.” Lewis is still being accused of bullying.

With that being said, Lewis has still reached out to ten different superintendents, requesting the names of teachers absent on the days of the “sick outs”. Some counties have given names, like Bullitt County, but none have been released. Lewis stated that no superintendents “have indicated that they will not comply.”

Assumption sophomores have also been affected by these sickouts. Some sophomores serve at JCPS schools, and it just happens that three out of the six sickouts have fallen on ACTS Wednesdays. These sophomores have only attended seven of their eleven ACTS days. Three are due to “sick outs”; one was due to a snow day.

Sophomore, Ella Soph, serves her first grade classroom at Lincoln Performing Arts School. She says, “I feel like I would’ve developed more of a relationship with my kids if I was there more often.” However, she also said that she’s not mad about the “sick outs” and understands why they are happening.

As the congressional sessions are wrapping up, there is a lot of speculation on whether or not teachers will call in another “sick out” this Thursday, March 21st.

It was announced last week that House Bill 525 has passed.