Walk a mile in her shoes

The Mary Byron Project is sponsoring the third Assumption Walk a Mile in Her Shoes on Sunday, March 23from 2 to 4 p.m. at the Green.  The Walk a Mile is an international event that allows men to take a stand against dating violence.

The Mary Byron Project and Assumption version of the Walk a Mile allows the three all boys schools in the area, St. X, Trinity, and DeSales, to compete for a golden shoe trophy.   The race is an 8×800 that takes place on the AHS track.  The major difference between this race and any other track race is that the young men will wear high heels while running.

Each school has four teams that run time trials before the final race.  Then the fastest team from each school competes in the final race for the trophy.  The first year, Trinity won and this past year St. X won the trophy.  DeSales is expecting a very big turnout this year.

The entire event is to raise awareness for dating violence in our area.  For the past three weeks, the Mary Byron Project Scholars have been giving presentations to the students of all the boys’ schools to educate the young men about the effects of violence in a relationship.

The Walk a Mile is meant to educate the young men who are running as well as inform the community and spectators more.  There will be a variety of informative posters and speakers.  There will also be a table with volunteers from the Center for Women and Families, a local shelter for victims of dating and domestic violence.

Kizito Cookies and Heine Brothers sponsor the event and admission is free.  There will also be a bake sale that the Green Dot Club sponsors as a part of Walk a Mile.  The proceeds from the bake sale as well as any donations received will go to help put on the Walk a Mile next year as well as help the victims of dating violence. 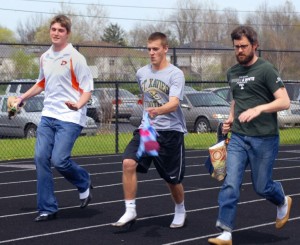