On April 14, 2013, militant group Boko Haram kidnapped more than 200 girls in Nigeria while they were going to school. The men tricked the girls by saying they were government soldiers trying to help them. Once they got the girls out of the school, they started chanting “Allahu Akhbar,” or, “God is great.”

That’s when a 16 year-old student there said “And we knew.” She was terrified to find out that they were not a part of the government

At first, the police officials denied to the Associated Press that the kidnapping occurred. However, they eventually did confirm the kidnappings. The 276 girls are still missing, two have died from snake bites, and many more are ill.

The Nigerian military’s failure to find the girls and the fact that a military group was able to kidnap almost 300 girls has gained national attention. The phrase “#bringbackourgirls,” has trended all over the world by celebrities and citizens alike who think the problem is worth getting attention.

Students have been made aware of the situation, and are quite passionate about the issue. Caroline Dolt, junior, says that this issue is very important because it’s harder for women in other countries to gain an education, and this is just another thing holding them back.

Dolt believes that education is incredibly important because it will, “make the country better and keep children from being brides.”

Hannah Thomas, junior, also agrees that they need education to get better jobs. Then it would help the women to rise above their oppression.

On the issue of getting the girls back, Dolt says, “Where’s the U.N.?”

Thomas says because of the publicity it has gotten, more people are aware of the problem, and now they want to do something to solve it. 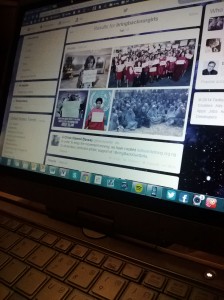