Assumption volleyball team gets an early start for the 2014 season

The Assumption volleyball team wrapped up another successful season in 2013, winning their 18th State Championship. This type of success doesn’t come easily though, so the volleyball team starts their training in the summer for their season in the fall.

This year the team will travel to Destin, FL, from July 25 until Aug. 1for team bonding and practices. The players will have all of their electronics taken away from them for the week so that they can focus on getting closer with new team members.

“This trip helps me get closer to my teammates because it’s just a week spending time with your friends with no technology and no communication with anyone else but each other. We get to know each other better, and we get to know the new people on the team each year,” Molly Sauer, junior, stated.

One of the reasons that this trip contributes to the success of the team is by focusing on team chemistry. The chemistry between players off the court is just as important as it is on the court.

Sauer also states, “I think this trip helps us to become successful because it shows us that volleyball isn’t just about the game on the court, it has to deal with how you all play together, and the relationships off the court.”

This season looks hopeful for the Assumption Rockets as they begin their hard work this summer and make their way to their 19th State Championship. Regular season games begin in Aug. and tournament games will start at the end of Oct. 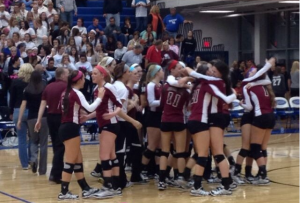