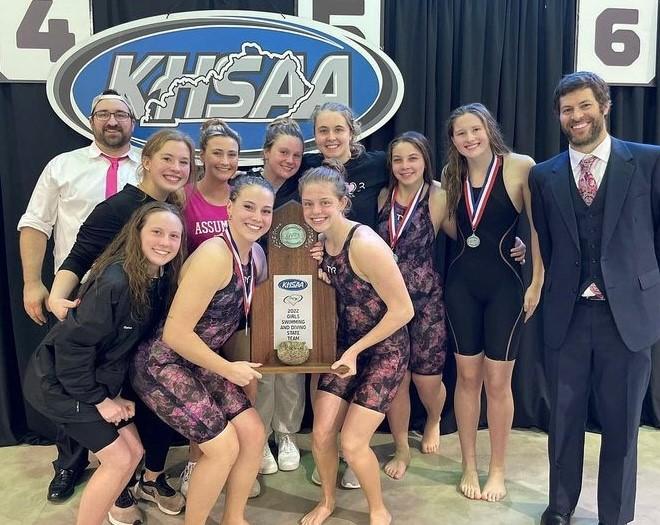 The swim team’s season started off strong and rocket swimmers had already made huge accomplishments. With countless meets and practices in their season, their hard work and effort has not gone unnoticed. Each swimmer gave their all in everything they had to do to get to their destination at the state tournament. Their coach, Rick Stewart, had led the team to many wins throughout the season. At the Assumption Rocket Blast-off, the team placed fourth overall. Their next meet, the SHA Dual Meet, they improved by placing second. They just keep going up from there though. At the Eastern Dual Meet, the team placed first. This, however, wasn’t the end of their winnings. The team continued to place first at the Highlands Dual, Fort Knox Dual, Mercy Senior Night Dual, and at the Brown Bear B Sprint. Each of these meets had fierce competition but the rocket swimmers stepped up to the plate to come out with these victories. One meet that stood out against the rest was the 2022 SHDHS Winter Classic in Barbourville, Kentucky. There the swim and dive team placed first as well as bonded as a team. Senior, Eden Humphrey stated, “My favorite memory of this season so far is going up to Barbourville, Kentucky. We took vans up to the meet and it was a really fun opportunity to bond as a team. We also had great competition that prepared us for the rest of the season!” Each of these meets led them one step closer to the state meet. The team’s top nine swimmers prepared to race at state with hopes to come with a trophy. The personality of the team shown through when they showed up to the meet in business casual attire. In the end, the team placed 4th in the 200 medley relay, 2nd in the 400 freestyle relay, and 3rd in the 200 freestyle relay. All of the individual swimmers had huge accomplishments at the meet. Ella Welch, a senior on the team, brought home 1st place in 50-meter and 100-meter freestyle event. However, this wasn’t enough for Ella. She also managed to set the school record for 200 medley relay, 400 freestyle relay, 50 freestyle, and 100 freestyle. Her teammate, Eden Humphrey, holds the record for 200-meter freestyle. These seniors left their mark on Assumption’s swim and dive team and their legacy will carry on. Overall, the team placed 2nd in the state. Ella Welch was named Most Outstanding Competitor and Rick Stewart was named Coach of the Year. What an amazing way to end a hard-worked season.