How long have you been doing cosplay?   About three or four years

How did you get interested in cosplay?   When I went to my first convention, I saw a bunch of people in really cool costumes that I recognized from different TV shows, movies, and cartoons that I liked. I realized I would have more fun at the conventions if I participated in cosplay.

How much of your time do you commit to cosplay?  I usually do most of the work on my cosplay about two or three months before the con I’ll be going to.

Why do you find cosplaying fun?   I’m a huge sewing nerd, so I love seeing how much effort people put into their costumes. I also love how many people I meet through cosplay.

How often do you do things involving this activity?    I usually go to about ten meet-ups a year just because it’s a chance to meet new people and hang out with friends.  I also go to about four or five conventions a year.

Has cosplaying helped you meet people?   It’s helped me meet so many amazing people and has helped me make amazing friends.  Most of my friends go to different schools. Most people think that cosplayers are compete nerds who have no social life outside of conventions, which is so untrue it hurts.

What is your biggest accomplishment in cosplaying? I don’t really believe in competing like that just because if I worked hard on a costume and someone says it isn’t all that great, I would be pretty upset.  The first time I’ve won an award was at a local anime convention; I won the judges’ award, and since then I have won a couple other awards.

Heard in the Halls: February Edition 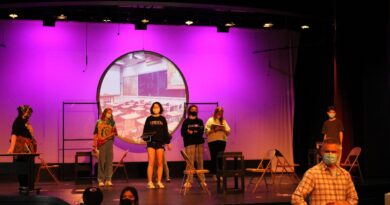 10 thoughts on “Around AHS: Elyssa Werner”