On Saturday, May 24, the Kentucky State Track Meet was held at the University of Kentucky Outdoor Track Complex in Lexington, Kentucky. High school track teams came from all over Kentucky to compete for the state title.

After switching locations from the University of Louisville to the University of Kentucky’s new track in Lexington, teams came in with a renewed spirit to win. After the Rockets came in fourth place in their 2013 season, they were looking to for a win to live-up to their overall victory in their 2012 season. Although the Rockets fell short this year and came in seventh place, they had a few races that went in their favor.

Abby Wright, junior, ran three races with each one of them ending very differently. To start the morning off Wright, Sarah Crawford, Bailey Davis, and Meghan Carrico ran the 4×800 relay. This event consists of four runners running two laps each while passing a baton to send the next runner off to complete the race.

“On the first lap I was thinking, ‘this is weird, I’m leading a race at State.’ I heard the crowd saying my name and to bring them home,” Wright said.

Wright anchored the team to victory finishing the race with a time of 9:27. Wright’s individual time was 2:19, which was the fastest of her group. After an exciting relay, Wright went on to run in the 800 meters and finished in seventh with a time of 2:20. She and teammates Lisi Spence, Sarah Crawford, and Emily Wiegel  finished the night coming in ninth in the 4×400 (4 runners, one lap each) relay with a time of 4:06.

Although the Rockets came in seventh this year, that didn’t crush their spirits. The Rockets were happy to participate in the meet and have a couple of victories.

“When you are able to accomplish something for your team/school, that in and of itself means more to me than accomplishing the championship 4×800 title just for myself,” Wright said. 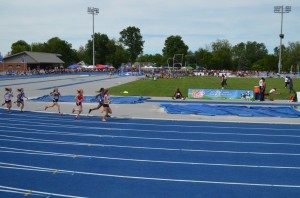 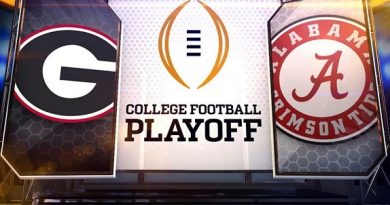