The freshman, sophomores, and juniors file in to the gym quietly and sit themselves in the bleachers.  The chairs on the ground remain empty.  Everyone waits for the closing of the year.

The lights dim and the Class of 2015’s counselor, Connie Druien, started off the prayer service. Druien invited the rising seniors, decked out in their “Fearless Fifteen” pink shirts, down to the floor to sit in the chairs. This signifies their move to becoming the leading class of the school for the next year. Madelyn Steurer, sophomore, then sung “The Prayer.”

Elaine Salvo, president, came up to announce scholarship winners. Over 20 students were awarded with scholarships.

Kelly Kirwan, English teacher, gave a speech to wrap up the year from the perspective of the faculty and staff.  She expressed the love that both she and the staff feel about the students.  She quoted Gwendolyn Brooks, saying, “We are each other’s harvest.”

Holly Zoeller, freshman, took the podium and tells about the freshman’s first year of high school.  She said that she had not known true friendship till meeting her classmates this year.  The sophomore class is then represented by a video filled with fun pictures from the walk and ACTS, with captions expressing what their class meant to them.

After the video, Abbey Sullivan, junior, came up to represent the Class of 2015.  Her speech gave a wrap up of the year and expressed how her class will become the leaders of the school next year and that it will be a great year.

A video then played in honor of Elaine Salvo, the president of Assumption who is retiring this year.  The pictures were filled with smiles, laughs, and big hair.  At the end, the pictures of other teachers who have been committed to Assumption for so long and are also leaving this year were shown. Salvo then came up to say her official goodbye to Assumption.  She then told the school that Becky Henle, principal, will also not be returning to Assumption next year.

Though it is obvious that the Assumption community will miss all of these amazing mentors, the students and teachers gave a warm farewell to them and this school year. 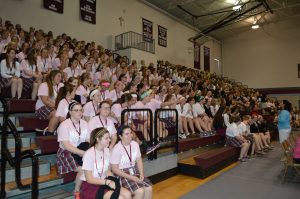 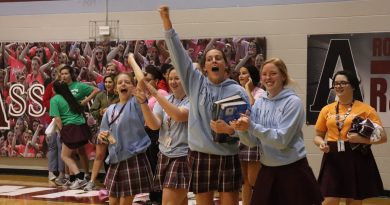 It’s Your Time to Shine: What will your legacy be?