Creating a second album that is just as good as the first album can be difficult, but R5 overcame this difficulty with a successful 11 songs. Sometime Last Night is an upbeat, catchy album that is sure to get stuck in the listener’s head. This album contains old school beats while having fresh lyrics.

R5 is a family band from Colorado. The band consists of Ross, Riker, Rydel, and Rocky Lynch, along with their lifelong family friend, Ellington “Ratliff.” Ross is the main vocalist, but also plays the rhythm guitar. Riker plays bass and sings. Rydel plays the piano and sings backup. Rocky plays the lead guitar and sings backup vocals. Ratliff plays the drums and sings backup vocals. They now live in California, and are signed with Hollywood Records. You can often hear their music on Radio Disney. They just released their new, pop album Sometime Last Night, on July 10, 2015 in the middle of their tour. R5 performed in Louisville, KY on July 29 at the Iroquois Amphitheater.

Sometime Last Night includes 11 songs and 3 singles, with one promotional single. The singles are “All Night,” “Let’s Not Be Alone Tonight,” “Smile,” and the promotional single of “F.E.E.L.G.O.O.D.” It includes many different beats and catchy lyrics. Beats in the songs on this album often go against the expected. For example, the beats in “Wild Hearts,” track 2, build up to what the listener would think to be a lively beat drop through instruments, but it actually slows back down to spread out beats and pulses. This plot twist would pose unlikeable, but in reality, it is a fresh change. The lyrics on track 8, “F.E.E.L.G.O.O.D.,” make the listener want to sing along because of its repetition in spelling “Feel Good.” These lyrics are sure to get stuck in the listener’s head. The piano, drums, lyrics, and guitars work in harmony to create a popular album.

These songs may also be in comparison to many of One Direction’s songs because of their catchiness and energy, but R5 has a twist — Rydel Lynch. Being the only girl of the group, she is able to hit the higher notes and even sing her own song, “Lightning Strikes.” This song is about wanting to get back together after a breakup. The difference in instruments and voice levels makes this album interesting and easy to listen to.

Though people may sneer because of this band’s affiliation with Disney Channel, they should not be overlooked. Their ability to create music and perform it unlike any other band is what makes them noteworthy. This energetic album is fun to sing along to, and even better to hear in person. Sometime Last Night is an album that you not only want to hear last night, but today and tomorrow, too. 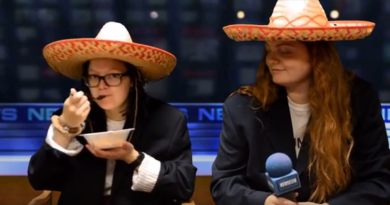 Viral Video of the Week: October (3)