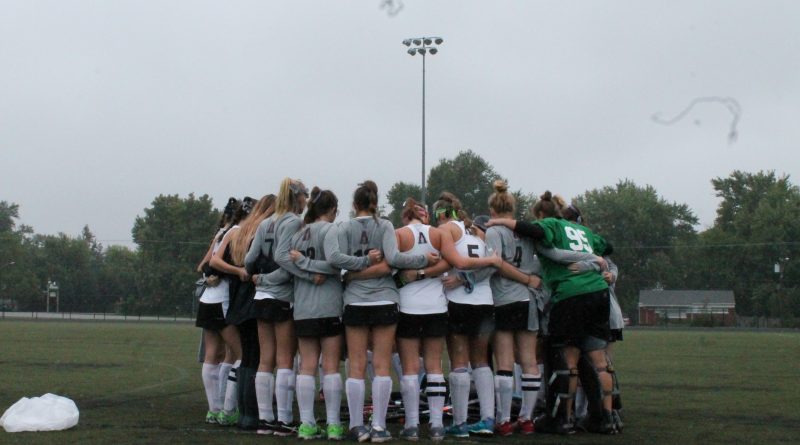 The average Assumption student usually associates mugs with warm beverages and winter. However, to the Assumption Field Hockey team, it means much more.  A mug is awarded to the victor of the Assumption versus Scared Heart field hockey game. The players not only see the mug representation of a W on their schedule, it encompasses their hard-work and determination to be the best they can be.

This year, the Mug game was played at the Assumption Green on a cold, wet Sunday. The young Assumption team gave it their all but lost the nail biter in the last few minutes of the second half. While the Assumption team might have lost, there was no question that they left everything on the field. Senior Caption and Ball State commit, Libby Kraus, described her team as hardworking, and Coach Schafer described them as resilient. These adjectives were shown throughout the game by the players, especially by senior, Avery Dornfeld.

Avery is a key player and leader for the Rockets. Many know her for her skills on the field, but it is her dedication not the team that makes her stand out to her teammates. During the Mug game, Avery sustained a serious injury to her wrist and was escorted off the field. Everyone assumed she was out for the rest of the game, maybe the season, but Avery stepped up for her team when she ran back onto the field with her arm wrapped up ready to play. Her resilience inspired her teammates and raised the level of play.

While the Rockets may have not walked away with a win, many great things came from this year’s Mug Game. The team and supporters held a food drive and donated the items to The Seneca Food Pantry. The state-runner ups still have a long, encouraging season ahead of them. Coach Schafer stated, “If they live up to their potential, the girls will have a very promising season.”