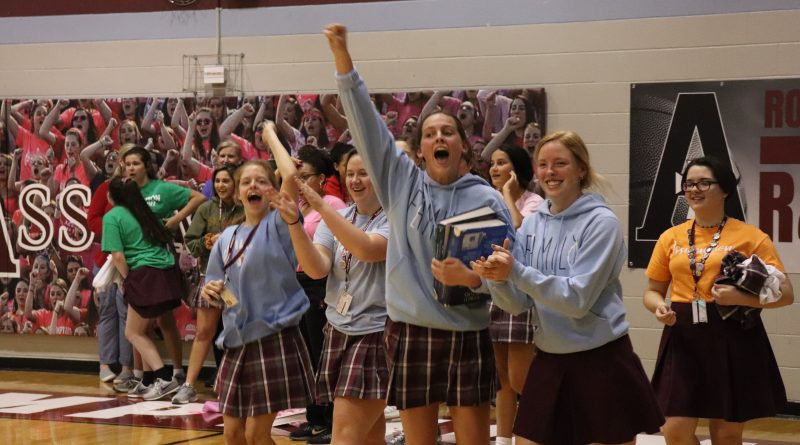 The Tuesday after Spring Break was a special day. It was the day Family Olympics was brought back to Assumption. Family Olympics, which was an event that used to be held at Assumption, was Reese Givens’ senior dream. She wanted everyone to have fun and to have the opportunity to bond with the other members of their family. Family Olympics ended up being a huge success thanks to all that helped.

All the members of Family Council were so excited for the event, and according to Becca Joaquin, the administration were too. Their excitement grew as it got closer and closer to the big day, but Givens got more and more nervous. Her nervousness and concerns were normal considering that they did run into some obstacles that day. They had an emcee who was sick, and of course there were some technical difficulties with the music. But Joaquin never doubted Givens and her bad puns. She was only nervous about the event not being held for so many years. Joaquin was also very scared that the event would not fulfill Givens’ vision, but Family Council did an amazing job on helping put together the Family Olympics.

According to most people, the day went smoothly other than a few jammed fingers from the beach ball game. The weather was a big concern. Thankfully, it ended up being beautiful outside, and the games could continue. There were various games that went on, including four corners, musical chairs, riff offs, three-legged races, and a beach ball game. After all the events were over, there was a relay race between all nine families. Carlow ended up winning the relay, but Cork ended up winning over all.

The day was a huge success, and there are high hopes that Family Council will hold it again next year. Joaquin said, “It was a great way to increase Family Council’s visibility and to plan something fun and meaningful for the families.” This event allowed families to grow closer, and it made the family competition a little more interesting.