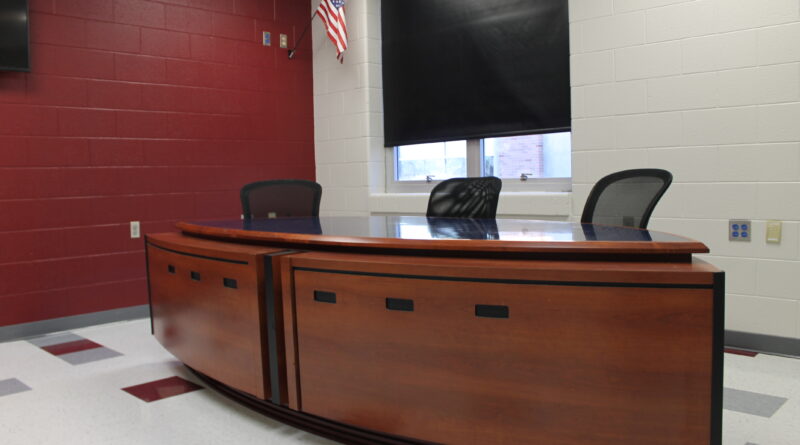 Assumption’s building has undergone many different changed this year. We have many new additions from a new cafeteria, atrium, learning center, and chapel. Additionally, there is a space that is very unique, the new broadcast room. What was formerly the home of the business classes taught by Mrs. Maxted, is in process of becoming the broadcast room. Mrs. Lang excitedly comments, “we are excited to bring back broadcast media and have the space to build a real studio!”

This room is on the third floor near the media center. While it is still in process of final touches, if you visit the broadcast room, you will find a news desk. This news desk was generously donated from WDRB to Assumption for our usage. They are currently working on getting technical equipment, including lighting and sound, for the studio. Assumption is also working with a communications expert to obtain the necessities for a functional studio.

This broadcast room will have many different functions. Mrs. Lang says, “we hope to pilot “broadcasts” of the morning announcements a few days a week on our “WAHS” network.” Students from the Speech and Debate team will serve as anchors in collaboration with journalism students writing and producing segments. Once the program is up and running, students outside Speech and Journalism will be invited to become involved with the technical side. For example, they would be involved in recording, editing, and producing.

According to Mrs. Lang, Assumption previously offered a broadcast media class, but it was eliminated due to space.  Eventually, the goal is to offer a broadcast media journalism class in the overall curriculum once again. Several teachers will be involved in this program, including Dr. Wieland, Mrs. Culver, Mr. Stairs, Mrs. Lasley and Mrs. Schaefer.

We are so excited to see the magic that is created in this room that will showcase more Assumption students’ talents!

Assumption welcomes students around the globe